This blog is the last of the three-part blog series on why textbooks are so expensive. Hopefully CampusBooks.com has been able to clue you in to different perspectives on the textbook debate that you may not have otherwise considered. 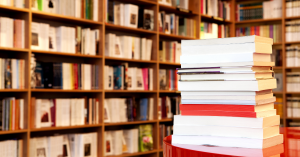 According to the National Association of College Stores (NACS), only 22.4 cents of every textbook dollar actually goes to the bookstore. Of those 22.4 cents, only 4.4 cents (pre-tax) are actually profit. The rest of the 22.4 cents goes to pay overhead costs and employee wages.

Many students have expressed frustration with the college bookstores because they see online retailers who sell the international versions of their books for much lower prices than the college bookstore. Because of this, they assume that the bookstore is overcharging them in order to make higher profits. According to the NACS however, it is the publisherâ€™s decision to sell books at such a low rate internationally. The NACS supports a â€œone-priceâ€ policy that would ensure that U.S. students donâ€™t have to pay more than their international counterparts. NACSâ€™s official stance is that â€œU.S. students should not, by themselves, bear the sole burden of course material development costs or suffer the consequences of underdeveloped countries’ inability or unwillingness to enforce copyright laws.â€

We hope the three viewpoints weâ€™ve presented to you, from the author, publisher, and bookstore, have given you more insight to the textbook industry so understand where your textbook dollar goes. No matter who you believe, rest assured that CampusBooks is always working hard to give you the easiest way to find and buy cheap textbooks.
————————————————————————

From a Publisherâ€™s Standpoint

Everyone always blames the publisher.Â  Why are textbooks so expensive?Â  Because the â€œevilâ€ publishers raise the prices, print unnecessary editions, bundle textbooks with useless CDsâ€”all to price gouge the struggling student who is just trying to get an education.Â  The Public Interest Research Group (PIRG), a public advocacy group, is one proponent of such views.

According to the Association of American Publishers (AAP), however, the PIRG ignores the facts and uses figures that no independent research can back up.Â  â€œPIRG just doesn’t let the facts get in their way,â€ asserts Patricia Schroeder, president and chief executive officer of the AAP.

Here are some examples ofÂ  PIRG discrepancies according to the AAP:

PIRG:Â  Textbooks are sold for less in overseas markets.
AAP: Yes, books sold overseas are cheaper, but that is because they are priced to the individual markets. These sales, while small, help publishers recoup some of their investment in producing a textbook. Without overseas sales, the entire price of production would fall on U.S. students, forcing up the price they pay.

PIRG: Pearson’s new 6th Campbell’s Biology was found to be 97 percent more expensive than a used copy.
AAP: New textbooks–like new cars and most other consumer products–cost more when they are new! On average, used textbooks are sold in bookstores at 75 percent of the price of a new book.

PIRG: Thomas Learning should produce an online version of their Calculus textbook.
AAP Assertion: Publishers have produced hundreds of online books, but there is virtually no demand for online textbooks, according to the National Association of College Stores.

The AAP maintains that they are just a business giving the consumer (i.e. professors and students) what they want and need.Â  They are not in the business of making outrageous profits.Â  Professors have free choice to choose the textbook for their classes.Â  According to a study by third-party researchers Zogby International, 38 percent of college professors said they were satisfied with how frequently new textbook editions were released, or that they were not released frequently enough.